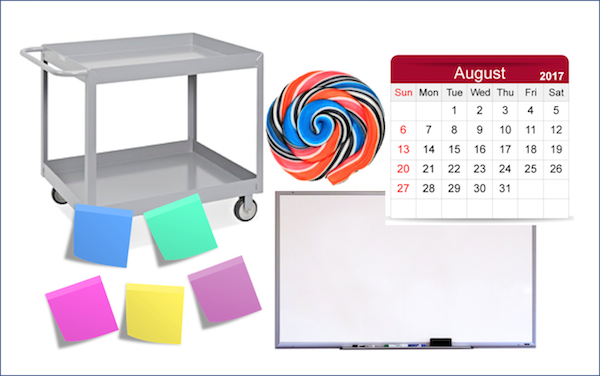 What non-LEGO items are essential in your team meeting room?

White boards and suckers. My team couldn’t function without a huge white board and plenty of colorful dry-erase markers.

We like this folding 4ft X8ft platform for under the FLL table - can be put away easily and carried to wherever you need. It’s called Centipede XL and available at home improvement stores.

Response by Asha Seshan A list/poster of the Core Values. Here is one by Ana Paula that you can use. 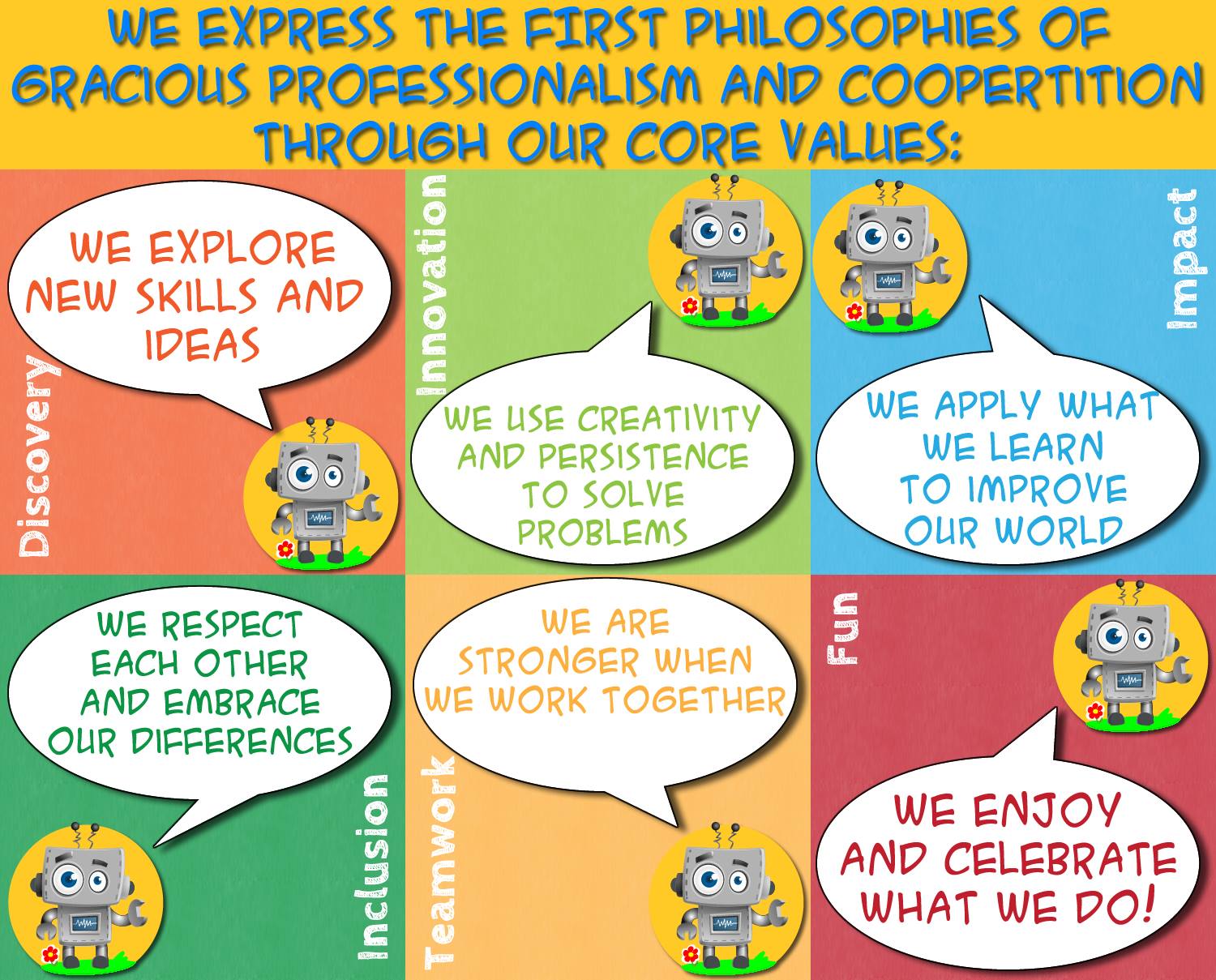 My team liked having a tape measure to measure the length of the next segment of the robot’s path. Oh yes! Print at least one copy of the rules / mission instructions and consult them often!

A calendar. Also: a binder with the season’s challenge guide, updates, and rubrics.

Something we tried last year: a big poster with several blank spaces, each labelled for a different question we expected the Core Values judges to ask about what the team did over the season (e.g. “examples you saw of someone on the team making their teammate feel valued” or “ways you made sure everyone was included in decisions.” When the kids notice one, they write it on a post-it and stick it on the poster.

… or at least that was the idea. We didn’t get a huge amount of up-take of the idea last year.

Oh - for coaches: emergency contact info for every team member and coach at your team meetings, all in one place. (Edit: in one place that all coaches know)

I like that idea. With my team, each group working together filled out a progress report for each meeting. These include their objective (what they plan to do that meeting), their progress, what the next steps are and what they learned. Last season I added “what core values we displayed and how we displayed them”. Sometimes there were good answers. Sometimes not so much. I plan to focus a little more heavily on that this season. We’ll see how it goes.

We have the rolling chair problem as well. Sometimes one of them becomes my chair. One time the other one became my foot rest. Fortunately it only took one time.

We got a rolling cart last season and it was so incredibly helpful, especially at competitions. So much easier to be able to roll things around than carry them. We had zero dropped robots at competition last season compared to two dropped robots and one dropped set of attachments the season before. And it does help to have a place for all of the robots and attachment boxes between meetings. I highly recommend getting a cart for the team to use.

During our longer practices, we sometimes take a break and send everyone outside to run around and play. The home we meet at has a trampoline and that’s always a big hit.

Pool table cover to keep dust (and curious hands) away.

Great question and answers. A must have for our after school group is snacks. We also have a rolling cart that kids can use for organizing and roll out of the way. One mistake I made: having one rolling chair. We had more silly arguments over that than anything related to FLL.

Someone gave us a small fridge they were going to throw out. Now we have cool drinks specially in those hot months. Boxes/bins for sorting, storing, transport, etc. The brown boxes our school gets from copy paper is strong and multi-purpose. Even the cover is a good sorting device.

Whenever there is a limit to the robot height, we make one or two pvc plumbing pipes that are exactly the regulation height. That way it’s easy to position the pipe next to the robot. Our regionals adopted the same practice. A robot design book.

I agree with snacks or some other activity for the kids to finish with at the end of practice.

White board, Post-its, something for music, snacks

A set of educational spring scales to measure forces on the robot. www.si-manufacturing.com. I use the spring scales to help the kids understand the forces on the robot. There are many useful measurements here is a short list: You can measure the increase in traction with increasing weight of the robot demonstrating the relationship between friction and weight, You can weigh parts of the robot to determine how much force the motor needs to lift or move that part, You can demonstrate how gearing up or down increases or decreases the torque (force x arm length) required to take an action, You can demonstrate how weight affects balance or how one can calculate how much weight is needed to balance something like a long lift arm. If you have advanced team members and need a challenge you can demonstrate the resolution of forces along vectors (answer the question how do I balance a force that is at an angle), You can weigh parts to help estimate the weight of the robot (although this data is readily available on bricklink also), I have also had them use the scales to load up several sample structures to see which one has the least amount of deflection for a given force (basic structural testing).

I just added a LED projector and screen. At the moment it only connects to the coach’s computer, to support RoboCamps. However, I will add new cables so that it can connect to student computers to facilitate student communication. My projector is only a cheap Chinese model, about AU$230. (Corners won’t focus.) It also makes for monster movies when appropriate.

Regarding emergency contact information… I have all the parents in a WhatsApp group, which we use for organising stuff. That also means all parents have easy contact with the coach and each other.

Coaching in an after school setting we make a calendar of practices leading up to big events and set goals moving backwards - we fill in what we accomplished at each practice at the end as a reflection and a guide for what to think about for the next practice. It especially helps for kids who want & need a preview of what’s coming next. The calendar is on chart paper that can be rolled up and stored.

Snacks, lots of snacks. That and our binder of EV3Lssons.

Response by Jucain Butler A non-LEGO tool we use to learn and reinforce concepts is Kahoot – an fun interactive learning app (Kahoot) that allows you to create customized quizzes and games. I create multiple choice quizzes about FLL like, which is not one of the challenges of FLL, a. Robot Games, b Core Values, c Research d Project, Math , and the faster you answer the more points you get and I make quizzes based on the robot like which one is NOT a sensor, what happens based on a image of some code, etc. its serves as sort of a break during the 3 hour class or research and programming. The kids love it, they pull it up on their computer or cell phone and race against each other to answer the question…. it also helps the teacher to see of the information is sinking in LOL!!!

« Day in the Life of
Building an FLL Table »