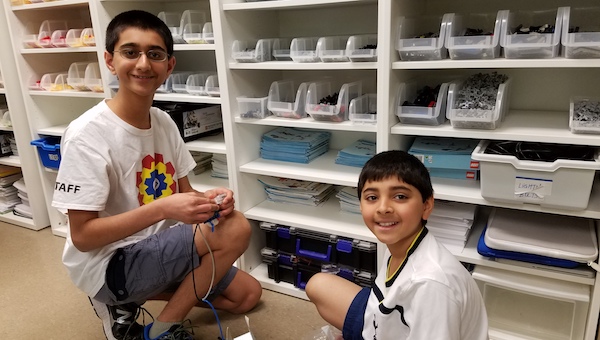 If you start out well, the rest of the tasks becomes a lot easier. In the case of a robotics team, “well begun” starts with being organized. This article shares both portable sorting techniques as well as ideas for your robotics lab. If you scroll to the bottom, you will see ideas quoted from the Facebook Group FLL: Share & Learn .

Students on your team will find it much easier to build if their LEGO parts are organized and easy to find. It is also much easier for a coach to visually see which parts they are running out of to order more. I have found that students get inspired while looking through their parts.

Keeping parts organized and easy to find can inspire students.

We started out in our first year with simple plastic storage boxes. These had small compartments in them. A big negative for this box was that you could not change the size of the compartments and they were rather small for anything other than pegs and smaller beams. Although we outgrew these small boxes for daily use in our robotics room, we still continue to use them to carry spare parts to tournaments.

Here are some alternative plastic boxes that could work well for your team.

Tool boxes can be easily repurposed for LEGO. A big advantage to the above smaller plastic boxes is that each compartment is bigger (and often adjustable). We know many teams that buy these or similar Stanley tool boxes. 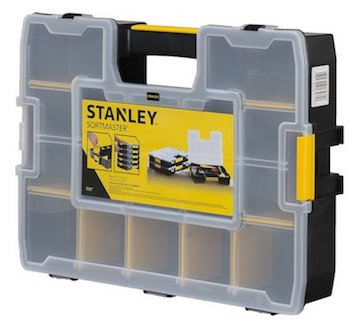 Some FIRST teams like using tackle boxes (like this one from Plano). They have many smaller boxes inside for easy sorting and a handle to carry them all together. 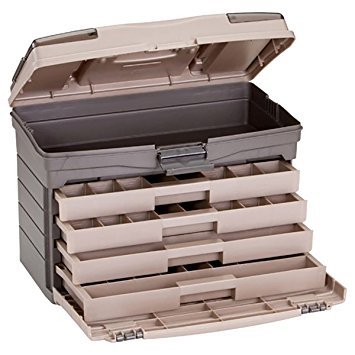 Text If you have bookshelves in your room, consider removable bins (like this IRIS Medium Stacking Bin). We like the clear bins so that you can see inside them, but they are available in many colors.

A rolling cart such as the TRINITY Double-Sided Bin Rack on the left can be very useful if you don’t have shelving and want the flexibility of moving the parts to different areas of the room. Each of the bins come off the shelves. 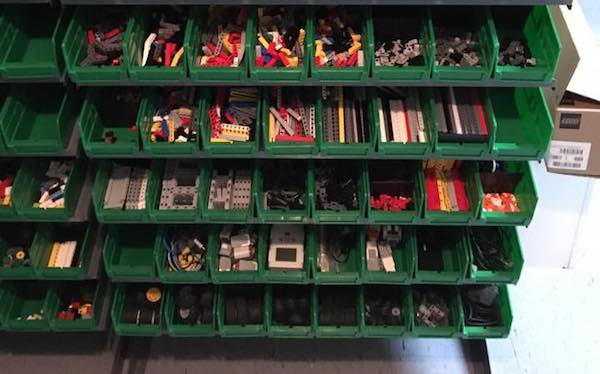 The following discussion is quoted from the Facebook Group FLL:Share & Learn .

We predominantly use old EV3 and NXT trays and sort them into per type, if they’re not overloaded they stack really easily for storage. If the team needs to transfer pieces between locations I use Tactix storage boxes. I usually have some ziplock bags for overstock of some pieces.

We use a tackle box to store most pieces and also use one of the ev3 tray/ for some of the bigger pieces.

You can even buy more trays and bins on bricklink or ebay. That’s we’ve done. We’re up to about 7 or 8 bins.

We use these small plastic drawers that stack. It’s so easy for our builders to see the pieces through the plastic, easy to pull open with one hand, and when we travel, we put a variety of pieces in small divided craft boxes for easy transport.

We use mostly plano tackle boxes, and bigger trays for large parts

Sorting party! its great to spend some time to do the sorting in a fun way., play some music, do some part hunting games, and it just goes so much faster.

We use a lot of plastic divided storage bins , (but we got them at Home Depot when they were super cheap), for small parts. Beams, wheels, sensors, wires and other large parts go in a rolling plastic tower with a couple of drawers. “Regular” LEGO bricks are in a big plastic bin, unsorted. Parents and non-FLL siblings do most of our sorting for us during meetings when we’re not actively building.