A Dozen or More Off-Season Ideas 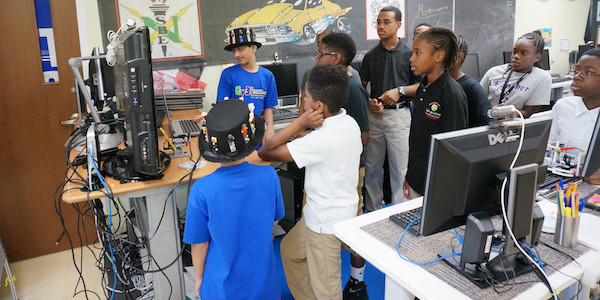 What can your team do in the off-season? There is so much you CAN do. These are some of our idas combined with ideas shared on the Facebook Group FLL: Share & Learn

Perhaps your team did not use sensors or did not use a particular sensor. Use the off-season to learn how to use those sensors. Or maybe you didn’t use any My Blocks. Use the FLL mat to test them out. Have you finished all the lessons on EV3Lessons.com?

Ruth Ann Francis I want my team to become more comfortable using sensors. In the past I’ve used the current robot game field and had the teams try to complete missions they weren’t able to do during the regular season. But, for my team at least, they end up doing just more of the same type of stuff they were doing during the season. This year, I want them to try new things. And, to facilitate that, I’m thinking about setting them different types of challenges - Maybe line following or line detection which will build up to going through a maze, particularly one they won’t see before they have to set their robot to go through it. I’m thinking about challenging them to pick up an object at an unknown location outside of their starting location. So they will have to use sensors to find and then pick up the object. Perhaps we might use the current missions but they have to solve a given one or two without using odometry at all. Or only using odometry a certain (very low) number of times during the program.

Did your team not get time to complete all the missions? Use the off-season to work on the missions some more. You can come up with different ways of solving the missions as well. Since you would have attended several events, you might be inspired to try something new. Have an internal contest at the end of three months.

If you are bored of this year’s mat and missions, look on eBay or elsewhere for a previous year’s “Field Set up Kit”/Challenge”. An experienced team might either sell or lend you an old kit. Old mats make brand new missions and can teach new skills (like colored line following)!

FIRST LEGO League also launched an official off-season in 2017 where teams can register and purchase the current year’s challenge and complete them at their own pace.

Have the best programmer on the team write up code. Have the rest of the team explain what the code does and how they could improve it. Have small challenges such as “who can write the best line follower”.

Maybe your team did not use any gears or rubber bands. Try to build small mechanisms. Or build a Technic set that might have interesting gearing that you can learn from. There are really good LEGO building books you can look at too by Yoshihito Isogawa.

Betty Chan Dao: Last year, they also had what they called FLL-A-THON Weekend trying to improve the robot or changing their approach to doing some of the challenge missions. It turned out to be really fun for them.

You might have more time now to host an Open House or demo at your practice location or the library. You can simply demo your FLL robot on an FLL mat or you can even run workshops.

7) Think about the research topic

Jen Bettinger Glaubitz: Field trips based on the theme for next year!

8) Participate in an Off-season event

Check with your local Operational Partner if there is an off-season event or scrimmage that teams can participate in. Or you can even organize one yourself. Local FRC teams might be willing to host one. You might even attend an Open Invitational or World Festival event as a guest for inspiration.

9) Invite an experienced team over

If you want feedback and ideas, invite a experienced local team to a team meeting. Experienced teams can often be good mentors for a team all year round. Share your work and see what feedback they have to give you.

How about making the team a website or Facebook/Twitter pages? Many FIRST teams have websites and social media sites to connect with other teams and with FIRST. You can use it to collect survey data, share you work with others, and even participate in FLL Twitter Chats.

Many states and countries off other LEGO robotics programs that will enhance your FIRST LEGO League skills. Some areas offer Robot Sumo, Robocup and World Robot Olympiad. Museums in New Orleans offer MINDSTORMS-related challenges. These do not usually conflict with FIRST LEGO League and still use LEGO MINDSTORMS.

Janelle Krause Lorenzen: We’re in the New Orleans area, and the World War II Museum hosts a themed robot game and project from February to May, so my teams will likely do that in addition to other missions they didn’t complete this year.

Often times building and programming a robot for fun results in learning new skills. Can you convert your EV3 into an musical instrument, a printer, etc.? Visit the MINDSTORMS Magic page for many ideas.

The off-season is a good time for team members to bond. Go on outings together - the movies, the playground, etc. The goal is for the team to get to know each other while working on FLL skills.

Swati Gupta: Team building activities which may include watching a game together, doing an outreach, field trips etc.

« Home vs Education Edition
NXT and EV3 - Working Together »