Day in the Life of 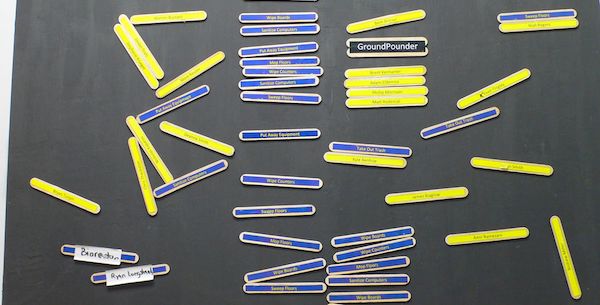 What does a day-in-the-life of your team look like?

Taking the example of a community team of 5-7 students we coached: Meetings start with a meeting where everyone talks about what they accomplished during the week as well as any problems they had/need help with. Then we spend some time on the robot, some on the project and also do a Core Value activity (usually as a break between the project and robot). A snack was included as well. Before the end, everyone cleans up as best they can - things that should not be taken apart are in a special “don’t take apart bin” and put on a shelf and the rest can go into a sorting bin. We discuss what everyone plans to do until the next meeting.

We usually meet twice a week. A couple hours on a weeknight to work on robot. Then on a weekend got 2-3 hours. We divide it this way since we’ve found it’s easier to get kids to focus on project when they have not already had 6+ hours in school.

Last year I pulled a tip from someone & asked the team if they would like 20 minutes of social time before we got going. We meet right after school from 3-5, and this was wonderful. It gave them time to decompress, and chat which is so important to teenagers. We also meet on Saturdays for about 2 hours. In the beginning of the year we put up a grid on the white board with all the various task areas, and they would put their name stick in whatever they wanted to work on. If there were too many people in one area, they could see it & would start negotiating. One task was “be awesome”. This year I’m going to ask them if they would like to try a kanban board & Slack.

The idea for the name sticks came from a robotics lab at University of Alabama in Huntsville that our high school team visited 2 years ago. They had both names & tasks on popsicle sticks with business card magnets on them. It was brilliant. Our HS team uses them too.

The Binary McBrickBots set their own agenda. I’m not allowed to write on the board!

Team meetings start with social time. Then we discuss about the assignments assigned for the week before. Achievements and problems both and possible solutions. Then some fun activity( core value or other) with snacks , then robot building , testing. After that assignments for next week , clean up.

We are a homeschool team with members who don’t particularly live close to each other (three different counties), so we only meet a couple hours once a week! We’re trying something different this year and half the team meets from 1-3 and the other half meets from 2-4. This means everyone is there from 2-3 and that’s when we work mostly on the Project and Core Values (with a little bit of robot thrown in to discuss strategy or changes we need to make to the robot, etc.). The majority of programming is done 1-2 and 3-4 with only half the kids there for each of the one hour periods. This (hopefully) will help cut down on time they spend waiting to test the changes they just made in their programming. I’m very jealous of teams that get to meet daily!!!