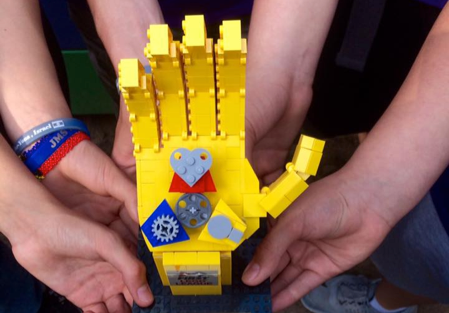 In April this year, I did a training course in Janeiro de Cima in Portugal. The course was organized by the Portuguese National Agency of Erasmus+ and, as a delegate from the Netherlands, I was given the opportunity by the Erasmus+ Youth National Agency to participate in this TC.

Erasmus+ is the European grant program for education, youth and sport. The underlying idea is that investment in education, training and non-formal learning is crucial to give people - regardless of their age or background - the opportunity to continuously develop, or as they say become a lifelong learner.

During the TC, I once again realized that the First Lego League program is a great program for young people to get acquainted with science and technology in a non-formal way. The program achieves all facets of learning with the Head as well as with the Hand and with the Heart.

But during the training, I realized that this program is much more focused on the Head and Hands and, unfortunately, far less on the Heart. Within the FLL program, the emphasis is on the teamwork and on the 7 Core Values associated with it. But with that we leave many opportunities unused. For example, the program could also promote issues such as social inclusion and equivalence (active citizenship) and increase opportunities for peers who are in disadvantaged situations. These young people are disadvantaged because they face personal problems or obstacles that restrict or even exclude their participation in projects. For example:

The program could also promote issues as multilingualism. Multilingualism is one of the cornerstones of the European project and also a powerful symbol of the European Union’s pursuit of unity in diversity. The FLL community makes it possible to contact teams across Europe and the rest of the world. By joining international tournaments, robotics camps or exchanges, we also increase the opportunity for team members to come into contact with foreign languages from a young age, allowing us to promote and facilitate dialogue between young people, language education and linguistic diversity. But this applies not only far way in another country also in own’s own country where it is possible to get in touch with children who speak different languages and come from different cultures.

Within the FLL program and through Core Values, the importance of personal development, respect and sharing of knowledge has already been well represented, but there should be more emphasis on this. Everyone deserves the opportunity to personal development, to broaden your horizon, to discover the potential professions and to make full use of learning. This has to be done in a safe environment where everyone is respected and protected. It is therefore that I’m convinced that we should not we exclude young people from the FLL program on the basis of learning performance or things like that.

And now that I see this on paper, I come to the conclusion that all of the above elements that are important for the Erasmus+ program also fit seamlessly into the FIRST LEGO League program. Social integration and equivalence, multilingualism, self-development and security are all elements that fit well in the Heart of the FLL and are more or less already represented. So let us combine these two programs and thus give young people even more and better knowledge and skills.

Therefore, I call up to all FLL teams not only to focus on the Head and Hands but also the Heart. Do not limit yourself to the team, teamwork and Core Values, but also look for the international dimension and the possibilities of active citizenship and citizenship participation. This makes the FLL program into a total program that covers a lot more than STEM, with much more to win than an Award.