FLL teams are like any other team. To truly function, they must have a strong bond and a common goal. The Final Elements have a passion for tinkering, programing and engineering, but gaming has allowed them to develop a friendship and support system that highlights both their individual strengths and their teamwork. Most of all . . . it is fun

The Final Elements are fortunate to have a fantastic meeting and work space. Valhalla’s Gate is a gaming store in Columbia, Missouri. Working there allows our team to develop in an unconventional way.

When The Final Elements formed in 2015, we still had a few months prior to release day. While my son had watched his sister the previous year, with The Fantastic LEGO Ladies, none of the other team members quite knew what FLL entailed. We decided to first focus on team bonding and cooperation. It is critical for the team to work well together toward a common goal, and beside the meeting table stood a shelf filled with open games for guests of the store to play. Our other coach, co-owner of the store, quickly guided the boys to choose from a selection of cooperative games.

These games have become an integral part of our team development. Cooperative gaming forces them to work together to reach for a common goal. They focus not only on their own game play, but also how their game play will best fit with their teammates. Sometimes this requires sacrificing a play to allow another to do something more strategic. Clear and concise communication is also needed for everyone to reach a consensus on game play approach.

The boys have utilized the games to solidify their identity. When we began discussing the Core Values in their first season, the team quickly utilized the games to understand the Core Values more Image_22_0deeply. They talked about how Coach Thad had to read through the rules with them – so they could learn together how to play. They talked about being a team and having fun. They also discussed how often they did not win, but that the experience was still valuable because of what they discovered. They are still developing Gracious Professionalism® and Coopertition® during gameplay, and identify it as important as they make solid strides toward this difficult goal each time they meet.

In addition to the boxed games, we have also discovered that computerized gameplay allows for needed relief and bonding at the end of meetings. Gathering around a round of Siege Towers allows the boys to fiddle with construction and physics concepts in a light atmosphere. As they compete to build the surviving highest towers on wheeled base platforms, they build skills which help them later consider the structural integrity of their robot.

While gaming is most often a part of off season or celebratory meetings, we also find it useful to infuse games into random meetings. It helps the team remember to have fun and to work together.

« Introduction of Core Values
The Joy and Passion of Coaching » 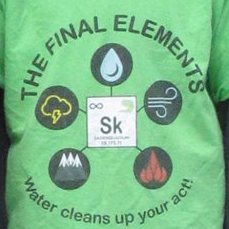